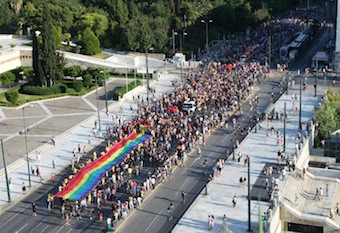 With the motto “Athens is ours,” the homosexuals of Athens paraded in the streets standing up for their rights. The Gay parade is in progress, under the 9th Athens Pride in Klathmonos square expected to finish the night of June 8.
“Our parade gradually widens. However, the road to equality and respect is still long,” the organizers of the festival said in their announcement whose main issue is the deficit that occurs in institutional and social protection of the rights of gays in Greece .
This is an event for the rights of LGBT – lesbian, gay, bisexual and transgender – people have been organizing for ten years now in Greece, while in other European countries and the U.S. it has counted decades more.
On June 14 and 15 the Festival of Gay Pride will be held in Thessaloniki, for the second year in a row.