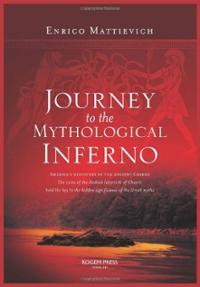 Dr. Enrico Mattievich, a retired Professor of Physics from the UFRJ, Brazil, suggested in 2011 that Odysseus’s journey to the Underworld took actually place in South America. The river Acheron was the Amazon, after a long voyage upstream Odysseus met the spirits of the dead at the confluence of the Rio Santiago and Rio Marañon.

In his book, Journey to the Mythological Inferno, which is a historical non-Fiction winners’ book, Mattievich exposes his thesis on ancient contacts between the Old World and America, based on Greek and Roman classical texts, leading to new ideas about America that many historians and geographers have been reluctant to consider until now.

Some time ago, the writer and archaeologist Henriette Mertz suggested that the legendary voyage of Odysseus and his ship’s crew, after the Trojan War – narrated in Homer’s Odyssey – would be a trip across the Atlantic, from the Gibraltar Straits to North America. She also suggested that the Argonauts could have navigated down to the South Atlantic Ocean, passed the mouth of the Amazon River to Rio de la Plata, and, following it upstream, reached Bolivian Altiplano and Thiaguanaco. Dr. Christine Pellech also suggested that Odyssey’s voyage to the Kingdom of the Dead was a real trip to America.

The thesis presented in the Journey to the Mythological Inferno claims that Greek and Roman myths related to the Underworld, the House of Hades, the Kingdom of the Dead or the Inferno, originated in South America, specifically in the Andean region of Peru, where the ruins of the Palace of Hades and Persephone, mentioned in Hesiod’s Theogony – written around 700 B.C. – still stand, known as Chavín de Huántar. This theory took form after Mattievich’s first visit to the archaeological site of Chavín de Huántar, in 1981.

In his book, Mattievich presents classical literature texts, such as Ovid’s Metamorphosis, that relate to the knowledge of America. The Cadmus myth, written by Ovid, for example, is estimated to be a myth immortalizing the heroic feat of the discovery and conquest of the Amazon River by the Phoenicians. The prehistoric presence of Phoenician navigators along the coast and rivers of Brazil, could be confirmed by hundreds of engraved inscriptions on rocks– called itacoatiaras – by natives of Brazil, where it’s often possible to recognize archaic Semitic and proto-Greek characters. The same name Brazil, according to Professor Cyrus Gordon, comes from the vocable brzl, used by Canaanites to denote iron.

The book has been published in English, Portuguese and Greek. For more information visit phoenicia.org