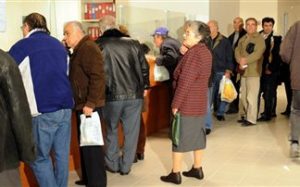 Dozens of IKA pensioners, the largest Social Security Organization in Greece, who went to collect their pensions on May 30 left without being paid or after receiving less money they are entitled to.
As soon as the banks opened, IKA discovered there was lack of €21 to €22 million in order to retrospectively pay the Pensioners’ Social Solidarity Benefit (EKAS), as reported in the Greek newspaper Eleftheros Typos.
As a result, IKA paid whatever the balance allowed. Some pensioners were paid around €20 less, while others were not paid at all.
According to the newspaper’s article, Labor Ministry’s officials attributed these variations to the fact that many pensioners, after having their income rechecked, are entitled to a smaller EKAS, for example instead of €230, they receive €170 or €50.
At the same time that staff officers of the Labor Ministry were claiming that “it was not a big deal” and saying that the situation has been normalized, IKA’s competent finance executives had raised the alarm about the €22 million missing from the EKAS payments.
The problem occurred because at the beginning of March, IKA estimated €40 million would be needed for EKAS, but as the retrospect payment was due this month, the Social Security Organization  found itself in need of another €21 million it had not ensured.