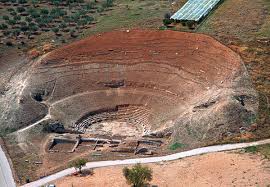 A series of new excavations on the site of Ancient Sicyon, one of the most important cities of antiquity, was approved yesterday by the Central Archaeological Council (CAC) of the country. The three-year long excavation project, which will commence this June under the auspices of the Archaeological Society and the direction of Assistant Professor at the University of Thessaly Yannis Lolos, will run its first phase until 2015 and could be extended afterwards.
In the meantime, a separate project will also be running with regards to the restoration of the ancient theater of Sicyon, one of the largest in antiquity. This particular program has been undertaken by the Diazoma club and receives its funding from the Regional Unit of the city of Corinth and the municipality of Sycion.

The excavations at the ancient agora of Sicyon are actually “reactivating” the excavation works carried out by the Archaeological Society in the 1920’s under the direction of Alexander Philadelphos, later on from 1933 to 1941 and from 1951 to 1954 under the guidance of Anastasios Orlandos, and in the 1980’s by Calliope Crystalli – Votsi. These excavations had focused on the site of the ancient market of the city and brought to light important monuments, such as a temple, the stoa, the arena, the parliament and part of the auditorium.

Τhe initial request of the Archaeological Society and Mr Lolos was a five year long project that would include the area south and southeast of the long stoa and the sanctuary located in the northwestern part of the ancient market,  as well as the basilica in the southeast of the excavated temple in order to find out more about the less known Byzantine history of Sicyon. The project finally adopted provides for research in the sanctuary and stoa- particularly in the rooms that were not excavated by Anastasios Orlandos. After the three-year completion, the continuation of the project will be brought again before the CAC.

Professor Yiannis Lolos has been working for years in the region and has published various scientific articles on the subject. During six research periods (2004-2009) he and his colleagues conducted intensive archaeological and geological surveys on more than 2,500 acres of the plateau of the Hellenistic era city and recorded all shells and tiles found. Public and private entities have undertaken the funding of the pending excavations.

Another new excavation will be also launched by CAC in the Faneromeni area in Hiliomodi, Corinth, where in the 1980’s a unique sarcophagus of ancient times had been discovered, which will be exhibited at the Archaeological Museum of Corinth. Excavations in the area will last three years under the direction of Dr. Elena Korka, archaeologist and Director of the Office for Supervision of Antiquaries and Private Archaeological Collections. Experts will attempt to provide answers to questions concerning the archaeological significance of the area, which is adjacent to the archaeological site of ancient Tenea, also known for attracting antiquity smugglers. The new excavation projects will be funded through a cultural sponsorship of the Casino Loutraki Club Hotel.