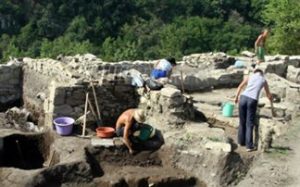 In the month of June, Greek stolen antiquities that are in Germany will be given back to Greece. About 8,000 pieces of vases dating to the Neolithic age were exported illegally to Germany by a group of foreign archaeologists under the guidance of Alfred Rosenberg, Hitler’s chief ideologist, after an illegal excavation conducted in a region next to the Greek town of Velestino in 1941.
These ancient vases will be returned to Greece by the Pfahlbaumeseum Museum of the Federal Republic of Germany, which assured its intention to return the antiquities, with a document it sent to the Greek Deputy Minister of Culture, Kostas Tzavaras, who forwarded it to the Greek Parliament.
The Pfahlbaumeseum’s scientific manager in Germany had informed the Directorate for the Documentation and Protection of Cultural Property since 2010 that the antiquities originated from illegal excavation in Greece were hosted in the museum in question.
The Directorate immediately contacted the Museum, which assured that the antiquities will be repatriated. A series of negotiations, as well as exchange of letters, followed. The Greek Consul in Stuttgart made contacts with the German Museum and the delivery will be made in June.
Under Tzavaras’ command to the General Directorate of Antiquities, all data concerning cultural goods and archaeological treasures, which have been stolen during the German Occupation, is being collected.
The Hellenic Ministry of Culture is cooperating with the Ministry of Foreign Affairs to promote a cooperation network with many countries by signing bilateral agreements in order to protect cultural goods and prevent their trafficking. Greece has already signed Cooperative Protocols with Switzerland, China, the USA and more recently with Turkey, while negotiations with other countries are in progress.
The Directorate for the Documentation and Protection of Cultural Property maintains electronic archives including stolen, misappropriated and confiscated movable monuments. There is also an electronic archive of illegal excavations and/or hoisting.
Several repatriations have been successfully made in the past, as Tzavaras made known. From 2009 until 2012, 278 cultural goods of Greek origin and many boxes with skeletal material, which have been illegally exported out of Greece, have been repatriated.
Tzavaras reported that the handling of many cases of cultural goods’ repatriation from various foreign countries is in progress at the moment.