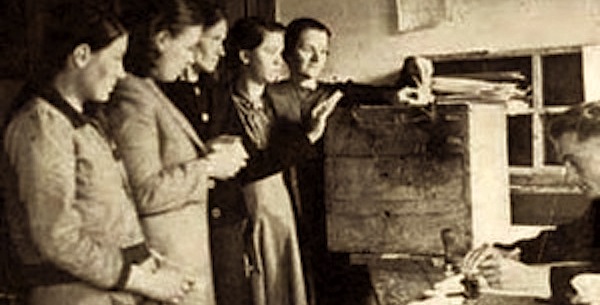 On 28 May 1952, 61 years ago, Greek women obtained the right to vote and stand as candidates in legislative and municipal elections.
For decades and after many struggles, women managed to obtain the right to vote in elections long after many European countries.
“Greeks are equal before the law,” as defined in the first Constitution of Greece, in article 3, in 1844, without referring to women, who did not obtain their political rights despite their great contribution to the struggle for independence from the Ottoman yoke.
Until the mid 20’s, it was granted that only men had the right to vote. One can see the dominant conception in the excerpt of the newspaper Nea Imera (New Day) on 20 March,1928: “Every woman is in an imbalanced and furious spiritual condition certain days per month… New and accurate surveys show that not only certain days, but during the whole month, all females are in spiritual and emotional imbalance…”
“Consequently, women voting is a dangerous thing and so repulsive.”
The slogan “Vote to Woman” was heard in Greece for the first time in 1887, by the newspaper Efimerida ton Kyrion (Ladies Newspaper), published by Kallirrhoe Siganou-Parren. The newspaper’s writers were exclusively women defending their rights.
In 1921, Greece’s then Prime Minister Dimitrios Gounaris, promised women voting rights and submitted a proposal to the Parliament, raising very strong reactions by the male representatives.
The proposal returned anew in 1924 to be voted in favor after five years of disputes and by Presidential Decree. On 5 February 1930, Greek women, and only the educated who had completed 30 years of age, were given the right to vote  in the municipal and local elections only.
The right to vote for and stand as candidate in legislative and municipal elections for women was secured on 28 May, 1952 by the law 2159, which gave women equal rights to men. Women did not vote in November’s elections because the electoral catalogs had not been updated.