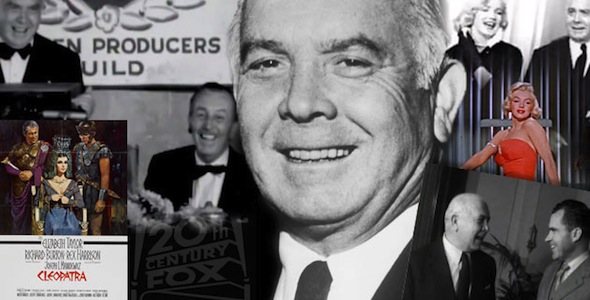 The nearly-forgotten story of the Greek American mogul, his humanitarian action and his connections to the White House are what intrigued Chrissochoidis to look deeper and unveil more details of the prominent Greek figure and the mark he left on the history of filmography.

Skouras was the President of the 20th Century Fox from 1942 to 1962. He resigned June 27, 1962, and oversaw the production of such epics as Cleopatra (1963) with Elizabeth Taylor, as well as the creation of Century City.

Sons of a poor sheep herder in a small Greek village, Skouras along with his brothers Charles Skouras and George Skouras emigrated to America in 1910 to escape poverty and soon climbed the stair of success. What made Skouras even more popular and admired was his philanthropic orientation that had him running a successful World War II aid campaign for Greek relief.

Chrissochoidis’ valuable findings urged him to publish a book and create a web research webpage to celebrate the late producer’s 120 birth anniversary. The Stanford scholar now hopes to find the necessary funds that will digitize the Skouras material.

From 1929 to 1931, Skouras worked as a General Manager of the Warner Brothers Theater Circuit in America. During these hard years of the depression, he managed to eliminate losses and eventually quadrupled the profits of the chain. Despite this success, his wish to be his own boss again, made him voluntarily leave the company. After that, and for a short while, he worked as a manager in Paramount.

In 1932, the Skouras Brothers (Charles, Spyros and George) took over the management of the Fox West Coast Theater chain, with more than 500 theaters. Once again, the threat of bankruptcy threatened one of Hollywood’s early film studios. The three brothers did what they could to stave of a disaster.

In May 1935, Skourass helped merge Fox with Twentieth Century Pictures. He later served as President of the merged company 20th Century Fox from 1942 to 1962 and was also a major stockholder of 20th Century Fox. In the 1950’s he, together with his brothers, controlled 20th Century Fox, National Theaters, Fox West Coast Theaters, United Artists Theaters, Skouras Theaters, Magna Corp, and Todd AO. Skouras’ assets in 1952 amounted to a dazzling $108 million, a point of power never before attained by any other theater or movie mogul, including the Schencks, Warners, Schuberts, or his countryman Alexander Pantages.

Skouras oversaw the production of such classics as Don’t Bother to Knock, The Seven Year Itch, The Hustler, The King and I, Gentlemen Prefer Blondes and The Robe. One of his biggest achievements is that he managed to sign a young model named Norma Jean Baker to 20th Century Fox, who after changing her name to Marilyn Monroe, would rise to fame and become the most famous Hollywood sex symbol of the 20th Century. Skouras developed a special relationship with Marilyn, who often called him Papa Skouras.

During Skouras’ tenure – which was the longest in the company’s history – he worked to rescue the faltering movie industry from the lure of television. 20th Century Fox’s famous advertising slogan, Movies are Better than Ever, gained credibility in 1953 when Skouras introduced CinemaScope in the studio’s groundbreaking feature film The Robe. With that invention, Skouras did much to save the entire movie industry from its newly-invented competitor – television. This new technology soon became the standard of the whole industry.

However, as revealed by correspondence and other archives, Skouras was not only a succesful businessman but was deeply involved with charities and used his connections, both actors and politicians of the time, to support the Greek War Relief Association from 1940 to 1946. Skouras died from a heart attack at the age of 78.