Olympia Dukakis Honored With Star on Hollywood Walk of Fame 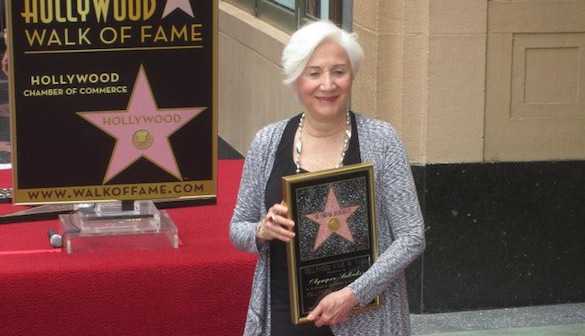 Academy Award winning actress Olympia Dukakis was honored with the 2,498th star on the Hollywood Walk of Fame today.

The Greek-American, who won the Oscar for her role in 1987’s “Moonstruck,” has enjoyed a career that spans 50 years in the entertainment industry. She started on television during the 1960s, and moved into film soon after, starring in “Steel Magnolias,” “Look Who’s Talking,” “Mr. Holland’s Opus,” to name a few. She’s also had much success on the stage, appearing in numerous productions including “Elektra,” and taking on the role of the entire chorus in the drama last year at the age of 81 when it was presented at the American Conservatory Theater in San Francisco, Calif.

The Walk of Fame ceremony, which took place at the Pantages Theater in Hollywood, coincides with The Greek America Foundation’s Gabby Awards this weekend in Los Angeles.

“We are thrilled to add another great star to our famed Walk of Fame. Ms. Dukakis is in a class of her own and has long been loved by fans the world over,” stated Ana Martinez, producer of the Walk of Fame ceremonies.

Olympia Dukakis was born on June 20, 1931, in Lowell, Massachusetts, the daughter of Greek immigrants Constantine and Alexandra Dukakis. She majored in physical therapy at Boston University, where she graduated with a BA. She later returned to her alma mater and entered the graduate program in performing arts and earned a Master of Fine Arts degree. She published her best-selling autobiography “Ask Me Again Tomorrow: A Life in Progress” in 2003, an introspective chronicle full of her trademark candor and wry humor.

Dukakis is also a strong advocate of women’s rights and environmental causes. She is a figure on the lecture circuit covering topics as widespread as life in the theater to feminism, Alzheimer’s, Diabetes and Osteoporosis. She has received the Lifetime Achievement Award from the Greek America Foundation and the National Arts Club Medal of Honor.