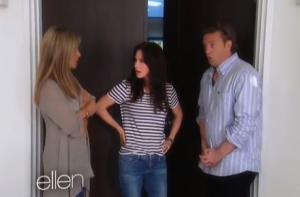 Jennifer Aniston and some of the “Friends” crew had a welcomed mini-reunion on “Ellen” this week.

In a segment for the talk show, Aniston showed up to Chandler’s, uh, Matthew Perry’s, home to get some advice on co-hosting with Ellen Degeneres. Calling Matthew “David” (as in, David Schwimmer, who played Ross on the popular comedy), Aniston seemed to confuse their characters with real life. Courteney Cox also turned up, causing a stir and a little bit of drama at the front door. Then, a few other women made their way out of Perry’s home, including Ellen herself, and Portia de Rossi. While Monica and Chandler fans got a treat, Ross was a no-show for Rachel (a.k.a Aniston), and Joey (Matt LeBlanc) was off playing in the fountain but not seen in the clip.

“Friends” is coming up on its 20th Anniversary in 2014, and the internet went crazy after a website supposedly confirmed a reunion would be happening around Thanksgiving. Warner Bros. quickly dispelled that rumor, saying it was not true.

And, in a throwback to his “Days of Our Lives” soap opera days, John Aniston also made a surprise appearance during the episode, taking part in a skit that involved him claiming to be the father of Jennifer’s French maid character. Even she seemed surprised, shouting, “Daddy!” and “Papa!” when she saw him.