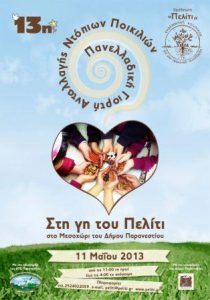 The 13th Pan-Hellenic Festival for the Exchange of Local Seed Varieties that is organized by the Greek Seed bank Peliti will take place on May 11-13, in the region Mesochori, Municipality of Paranesti, Drama Prefecture, North Greece. More than 7,000 people are expected to visit the festival.
As reported on Peliti’s website, this is an annual event that has been organized by Peliti every year since 1999. Farmers, activists, researchers, students and thousands of visitors from all over the world come to share their experiences on the cultivation of local varieties. For once again, people from all around Greece and from abroad will be present at this big celebration of nature, in green surroundings, the land owned by Peliti, and will send their message of rescuing local seed varieties, changing nutritional tradition and the way of life of contemporary man.
The founder of Peliti, Panayiotis Sainatoudis pointed out that the interest in seed exchange has grown bigger this year not only because people have realized the effort that Peliti is making, but also because necessity led people to them. “The need of improving their quality of life, to come out from nutritional deadlocks, to cultivate the land, to return to the primitive production in order to survive, to gain what is needed to live their families,” he said.
Saitanoudis noted that until last year they were receiving about 1,000 letters and e-mails, while this year they have already received more than 2,500 letters and e-mails, asking for information about local seed varieties and advice on seed supply and cultivation.
International Seed Days in Greece have been organized on the Peliti land for the second year. Delegations from 18 countries, such as Bulgaria, Romania, France, Germany, Great Britain, Venezuela, Turkey, Tunisia, Morocco, USA, Australia and India will participate in the festival.
The international activist Dr. Vandana Shiva will represent India, presenting the Global Movement Navdanya, which is about the struggle of small farmers in her country to maintain their own seeds and cultivate them on their own land.
Sainatoudis stressed that, “One of Peliti’s basic philosophical principles is to support man’s freedom to keep his own seed so he won’t depend every year on seed purchase, commerce, not even on the seeds supplied by Peliti.”
Everyone is invited to share experiences, as well as practices developed in their garden, neighborhood, city, country with regard to local varieties and food cultivation. Everyone has the opportunity to participate in a big seed swap, where the seeds of our ancestors will be offered to each other.”
While the seed swap on the first day (Saturday 11 May 2013) is open to everyone, the meetings on the second and third days will be open to those activists already involved in seed campaigns across Europe who wish to cooperate and promote coordination on an international level, according to Peliti’s website.