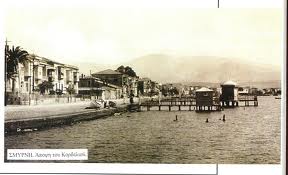 Second-grade students of the Second General Lyceum of Eleftherio-Kordelio, a city in northwest Thessaloniki, started a research in September 2012 trying to collect as much information as possible on the period before and after the Asia Minor Catastrophe and to revive memories of the past.
The students searched for photographs, papers and documents in their relatives’ cupboards, visual information material on television shows, on the Internet, in photographic archives, books and catalogs. They even found traditional costumes, songs and information about traditions at the associations the descendants of Asia Minor inhabitants have formed.
Athanasios Kandilaptis, teacher and coordinator of the project the students are preparing, explained that, “The next step was the trip-travelogue that the students made a few days ago on the coasts of Asia Minor, during which they saw up close everything they have learned through photos and information.”
During their journey, they visited Madytos, Canakkale, Ayvalik, Pergamum with the Asclepion, Ephesus and of course Smyrna and Kordelio. The communications that preceded were made with the Greek Consulate and the Consulate of Smyrna. The students presented their project, Thessaloniki Through the Ages, at the Gelisim College in Smyrna.
The students’ project will be officially presented on May 17, while a short film with the support of Greek channel ET-3 will project the event live streaming.
The material collected is multilateral and important. The relatives’ and students’ interviews, the data that the historian Kiriakos Hatzikiriakos submitted, the photographic material and the traditional costumes from the Association Saint Fotini in Eleftherio-Neo Kordelio stand out.