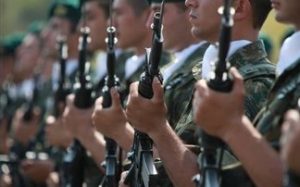 Radical changes are about to take place in Greece’s Armed Forces according to a new structure which was presented on April 25 to the Standing Committee for Foreign Affairs and Defense of the Greek Parliament.
This new structure is designed by the political and military leadership of the Ministry of National Defense and is expected to be ratified by the Government Council of Foreign Affairs and Defense (KYSEA) and will be applied soon.
One of the changes that this new structure will bring is the closure of the First and the Second Army Corps. The staff control administered by the Second Army Corps, which was considered as a rapid reaction force will pass to the First Army. Both Corps will continue to exist as lesser level formations. Other changes will include the reduction by 20 percent of senior officers, while 100 million euros are expected to be saved by the changes.
According to the newspaper Eleftheros Typos, the command structure will be cut by 40 to 45 percent, while the structure of forces by 20-25 percent. This will result in the permanent closure of 45 to 50 camps around the country, most of them on the mainland.
Hellenic Air Force combat groups will be reduced by 50 percent and the major formations by 17 percent. Four air detachments are about to close in Agrinio, Santorini, Timbaki and Ioannina. The plan has been months in the making.