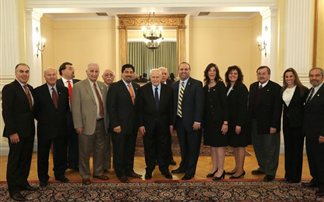 President of the Greek Republic, Karolos Papoulias, received a delegation of the Hellenic American Educational and Progressive Association (AHEPA) at the Presidential Mansion.
“We have made great progress. Many things can be done until the end of this year and 2014 will be a different year,” the President noted. He called the delegation to encourage American businessmen to make investments in Greece and to boost tourism.
“It seems that this year will be a good one for tourism and that our friends, the Americans, will not find a more beautiful country than Greece,” Papoulias said. He pointed out the intervention of President Barack Obama with German Chancellor Angela Merkel to help Greece during its crushing economic crisis.
Papoulias thanked the AHEPA delegation because, as he said, they are constantly helping their homeland and compatriots. He reminded them of the difficulties that the Diaspora in America has gone through and everything they have created and achieved.