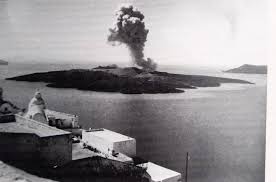 There is a special group of tourists who loves “explosions” and adventure and to walk nearby the volcanic areas, perfect for some some Greek islands, especially Santorini, which has one of the most famous craters, or caldera.
Volcanism on Santorini is due to the Hellenic Trench subduction zone southwest of Crete. The oceanic crust of the northern margin of the African Plate is being subducted under Greece and the Aegean Sea. which comprises thinned continental crust.
The subduction compels the formation of the Hellenic arc, which includes Santorini and other volcanic centres, such as Methana, Milos, and Kos.
Nisiros, another volcanic island of the complex has 3-4 kilometer-wide caldera that formed over the past 150,000 years in three eruptions, ranging from explosive and effusive andesitic eruptions to effusive and extrusive dacitic and rhyolitic activity. Its coasts are generally rocky or pebbled, but there are also a few sandy beaches.
The volcano is currently active (but not erupting), and fumaroles are found at the craters. Almost all of its eruptions involved phreatic activity. The latest eruptive activity was a steam explosion in 1888, after small ash eruptions in 1871 and 1873 and earthquakes are not infrequent.
“If other countries had the Aegean Sea volcanoes in their territory, they would do amazing things. There are countries with volcanoes smaller than ours which have managed to develop a volcanic – geological tourism. In Central France and Germany people work all the year with a little crater,” professor of Volcanology and Geothermal Energy of the Aristotle University of Thessaloniki (AUTH) Michael Fytikas told the Greek news agency ANA/MPA.