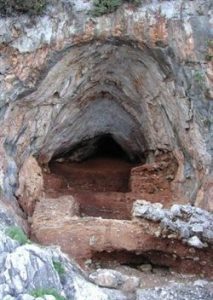 In the cave Kalamakia, which is located in the Peloponnese, Neanderthal bones and tools were discovered. This could mean that the area may have been a crossroad for ancient humans from Africa to Europe, as a group of scientists announced.
“Until recently, few things were known about the deep Prehistory of Greece, mainly because the archeological research was focused on the classical period and the more recent periods”, as Katerina Harvati-Papatheodorou, a paleoanthropologist and Professor at the University of Tubingen in Germany said.
The Neanderthal is the closest extinct relative of modern humans and has entered Europe before the arrival of Homo sapiens from Africa. He disappeared mysteriously 35,000 years ago, although recent findings have called this date into question. The timing of the fossils found in the Greek cave suggests that the Neanderthal and humans may have at least had the opportunity to interact, or cross paths there, according to LiveScience.
“Greece lies directly on the most likely route of dispersal of early modern humans and earlier hominins into Europe from Africa via the Near East”, Harvati told LiveScience and added: “It also lies at the heart of one of the three Mediterranean peninsulas of Europe, which acted as refuge for plant and animal species, including human populations, during glacial times — that is, areas where species and populations were able to survive during the worst climatic deterioration.”
Harvati and her colleagues from Greece and France presented their findings in The Journal of Human Evolution on March 13. The cave Kalamakia stretches about 20 meters deep into limestone cliff on the western coast of the Mani Peninsula on the mainland of Greece. The multiannual excavations brought into light bones and tools that are estimated to have existed 100,000 until 39,000 years ago. In the cave, researchers found tools such as scrapers made of flint, quartz and seashells, 14 specimens of child and adult human remains, including teeth, a small fragment of a skull, a vertebra, and leg and foot bones with bite and gnaw marks on them. The teeth strongly appear to be Neanderthal, the researchers believe.
Until recently, the only Neanderthal finding in Greece was a tooth discovered many years ago in the Lakonis cave, in the south Peloponnese, three kilometers northeast of Gytheion.
“Kalamakia, together with the single human tooth from the nearby cave site of Lakonis, are the first Neanderthal remains to be identified from Greece,” Harvati said. The discoveries are “confirmation of a thriving and long-standing Neanderthal population in the region.”
These findings suggest “the fossil record from Greece potentially holds answers about the earliest dispersion of modern humans and earlier hominins into Europe, about possible late survival of the Neanderthal and about one of the first instances where the two might have had the opportunity to interact,” Harvati said.
In the future, new researches conducted by Harvati and her colleagues could provide new information about whether interactions between the Neanderthal and modern humans coexisted and interacted. “We look forward to exciting discoveries in the coming years”, Harvati said.
Harvati was awarded in 2009 by the American Association for the Advancement of Science (AAAS), an international non-profit organization that publishes the journal Science.