Corfu Gets A Real Greek Breakfast 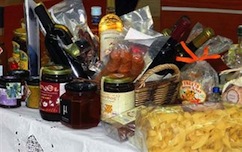 A Greek Corfiot breakfast was provided on March 23 by Corfu hotel owners at the Corfu Palace Hotel with the collaboration of the Chefs Club of Corfu. This initiative was accomplished in the context of Greek breakfast promotion to the Greek hotels.
It was started by the Hellenic Chamber of Hotels, which created a website (www.greekbreakfast.gr) and is trying to officially integrate as many hotel companies as possible into the program’s realization.
This initiative has been materialized with the collaboration of the Hotel Managers’ Association, the Producers Network Corfu Produces, the Biological Products Cooperative and the UNESCO Centre of the Ionian Islands.
The organizers’ aim was the integration of hotels in Corfu into the program’s realization. According to the official website Greek Breakfast, among the Ionian Islands only one hotel in Kefalonia participated and those in Corfu are expected to be incorporated this year, as “the program’s realization can determinatively contribute to make Corfu known as a popular gastronomic destination,” as reported in the local union’s invitation.
The special breakfast featured local traditional products.