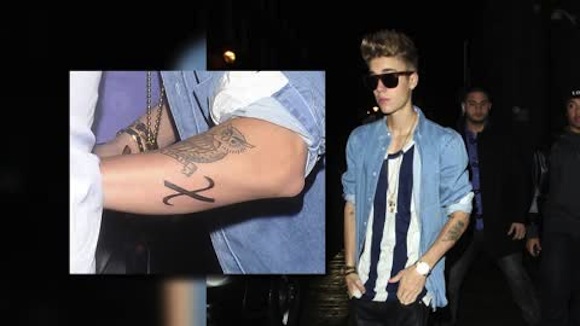 Justin Bieber got a new tattoo and it’s the Greek letter “X”!

The Canadian singer unveiled his latest addition of ink to his body on Monday, and even though he’s only 18 years old, this is reportedly his twelfth piece of ink.

The Daily Mail reported that “Biebs’ new body art is a large “X” on his left forearm. The British news site added that though some might find the new tat grave, it’s actually the Greek letter “hee,” which means Christ.

Originally the X was not an X as we use it in the English alphabet; it was the Greek letter χ (hee) which looks very similar to an X.

The Greek letter X (hee) is the first letter of the Greek word for Christ, Xristos ( Χριστός). This is why we also use the abbreviation Xmas for “Christ’s Mass” which is what the word Christmas actually means.

His “hee” tattoo joins other religious body art pieces for Bieber, including a pair of praying hands on his left calf and an image of Jesus on his right.

Bieber’s new tattoo now gives photographers another reason to follow him around as you see on the video below:

Some of his other tattoos include the word “Believe,” on his forearm, the Japanese kanji symbol for music on his right arm and a crown on his right collarbone.

Although twelve tattoo’s might be plenty the Inquistr quoted Bieber as saying:

“I definitely see myself getting more in the future, slowly but surely. I’m not going to go too crazy right away and get something on my neck or anything like that.”

Bieber’s new Greek X tattoo sits just below an equally eye-catching design of an owl which the singer had done last year. The owl was a symbol of wisdom for Ancient Greeks!