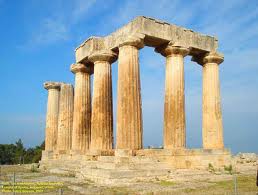 The Temple of Apollo in Ancient Corinth will be illuminated from Jan. 26. For many years it remained  in the dark, even though it is one of the most important monuments in the region.
In the summer of 2012, the 17th Ephorate of Prehistoric and Classical Antiquities conducted a study on the temple’s illumination. In collaboration with the Architectural Lighting company, the Ephorate completed the temple’s illumination project to highlight its best parts.
All the parameters related to energy conservation were taken into account, and attempts were made to avoid light pollution. The temple will be illuminated in such a way that will be easy to be reversed in case of restoration.
The head of the project was engineer George Veronikis, who cooperated with the company Smart Electric. The Club Hotel Casino Loutraki SA was the benefactor of the project.