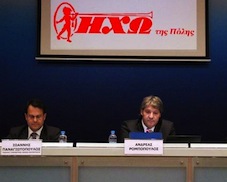 The Greek community in Istanbul has taken its voice around the world through an online radio station called The Sound of Istanbul, which debuted on Oct. 30 during a ceremony in the auditorium of the Secretariat General of Information and Communication in Athens. This was an initiative taken by the Greeks of Istanbul.
“Six months ago, two expats had the idea of creating a radio station for all Greeks in Istanbul, in order their voice to be sound around the world,” Andreas Rompopoulos, inspirer of this idea, said.
This online radio station was realized thanks to the initiative of an expat group as well as the expat newspaper IHO (Echo), published in Turkey since 1977.  In a recorded congratulatory video Ecumenical Patriarch Bartholomew said that providing information around the world is critical in this age.
Olga Kefalogianni, Minister of Tourism, attended the ceremony and was joined by many others, including journalists, artists and radio producers who discussed the statin’s aim. The Sound of Istanbul transmits on website: www.ihotispolis.com.