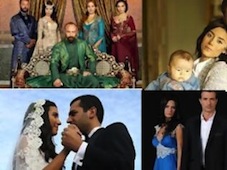 Greek orthodox Bishop Anthimos has unleashed thunderous criticism on Greek fans of Turkish TV soap operas, according to local reports.
“Nobody must watch Muhtesem Yilzil (a Turkish soap opera called ‘The Magnificent Century’),” he said. “Watching Turkish soaps is tantamount to telling them we’ve surrendered”. Greeks, like viewers in the Balkans and the Middle East where the series have long been broadcast, have found the allure of Turkish soap operas difficult to resist. In Athens viewers are glued to tearjerkers like “Suleiman the Magnificent” and “Sila”.
But Bishop Anthimos is not alone. Greece’s showbiz community is fed up with Turkish soaps too. “Sila in the morning. Sila in the afternoon. Sila 24 hours a day. We can’t take anymore,” complained TV actress Nikoleta Karra.
But Sila’s premise, which hinges on the romantic escapades of a ‘modern girl’, is the perfect escapism for austerity hit Greeks, many of who are reluctant to give up their soap addiction. Social networking sites are abuzz with chatter about “Greeks addicted to Turkish soaps” and “Turk serials on the Greek telly.”
Turkish soap producers are loathe to renounce the new-founded Greek trend, particularly within the political context of Prime Minister Recep Tayyip Erdogan’s Islamic nationalist government. Hot on the heels of the Turkish-Greek co-production Yabanci Damat (The Foreign Groom), which charts the highs and lows of a Turkish-Greek love story, comes The Last Balkan Summer.
Set in Greece, Serbia, Bulgaria and Montenegro the action takes place during the Ottoman wars. Another, The Marvelous Journey, is a cultural-gastronomic adventure between the two Aegean coasts. “At least on TV, peace between the two countries has broken out,” mused the Turkish daily Hurriyet.
(Source: ANSA)