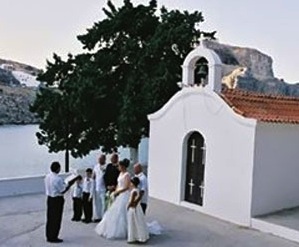 The picturesque village of Lindos on Rhodes is being deemed as the most popular destination for civil marriages and is attracting couples from all over the world, who want to get married in the small church of St. Paul or in the central beach.
Recently the first Turkish couple got married in a civil service in Lindos, which has hosted more than 400 so far this year. “Most couples come from the UK but lately we have seen a rise in numbers of Russians” Dimitra Antoniou, an official there said.
UK couples often choose original ways to perform their weddings, such as skydiving until they reach the beach where the ceremony will take place, on board boats and high-speed craft, get to the church riding donkeys etc. Russian couples on the other hand usually prefer to take their vows in the historic Orthodox Church of St Paul, which was blessed by Apostle Paul in 52 A.D.
Weddings began taking place at the St. Paul church some 10 years ago and an estimated 5,000 have been conducted since. As highlighted by Antoniou, the list is long and applications need to be filed a year in advance. “Lindos is the top spot for civil weddings although other islands of the Dodecanese are also high on the preference of the foreign couples,” said Antoniou.