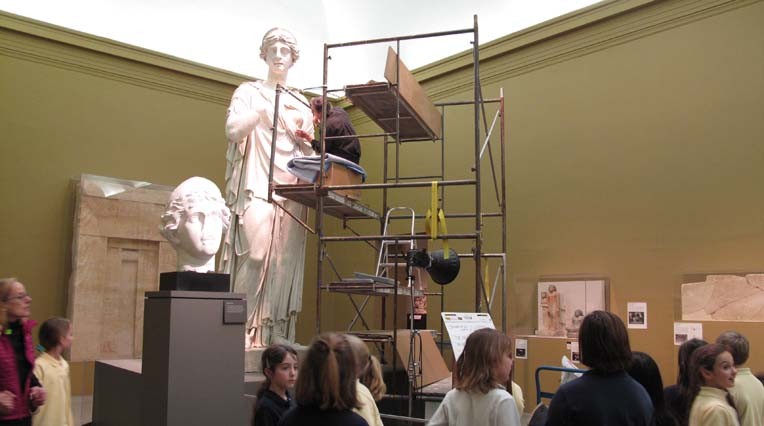 In March, the the George D. and Margo Behrakis Gallery,  a wing at the the Boston Museum of Fine Arts (MFA) welcomed a 13-foot marble sculpture of the goddess Juno. Due to its enormous size, the sculpture was airlifted into the gallery through an opening made in the roof.

Over the past several months, conservators have been treating the sculpture in place, giving visitors the chance to observe activities which normally take place behind the scenes. The colossal Roman sculpture, recognizable as Juno by her diadem, drapery, and facial features, was acquired for the Museum in 2011 by anonymous donors. Dating to the Trajanic or Hadrianic Period (early second century A.D.), it is the largest Classical marble statue in North America.

While much of its ancient history remains a mystery, the sculpture was part of the Ludovisi Collection and appears in an 1890 photograph of the Ludovisi Gardens in Rome. Shortly thereafter, it was purchased by Mary Pratt Sprague and in 1904 moved to the United States. It took a reported 12 oxen to haul the figure into place at the axial focus of a long driveway at the Brandegee Estate in Brookline, Massachusetts.

In the gallery, the sculpture was mounted on a large steel-reinforced pedestal, and the steel frame which protected it during transport was disassembled. Conservation treatment is proceeding as visitors watch the work to fix its surface, consolidation, reattachment of the head and arm, and other aesthetic issues of loss compensation.