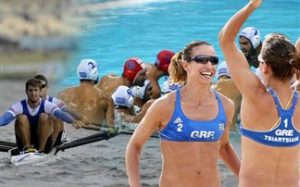 It is the fourth day of the London Olympic Games and Greek athletes are still in pursuit of a medal, having many difficult battles ahead!
Lefteris Konsolas and Panagiotis Magdanis made it to the rowing semifinals, having the best time reported in the 2012 Olympics until today. On Wednesday and Thursday the semi-final race will be held while on Saturday, August 4th the finals.
Unfortunately, swimmer Panagiotis Samilidis was disqualified from the 200 metres breastroke race. Nineteen-year-old swimmer Christian Golomeev did not manage to qualify to the semifinals in 100 meter freestyle swimming as well.
Moreover, many Greek athletes will compete today in sailing. More specifically, Dionysis Demou and Michalis Patiniotis will be in the Star crew; Giannis Mitakis in the Finn; Vyron Kokkalanis and Angeliki Skarlatou in men’s and women’s RS:X race, respectively; Anna Agrafioti in Laser Radial; Vangelis Chimonas in Laser; and Emilios Papathanasiou along with Antonis Tsotras in Star crew.