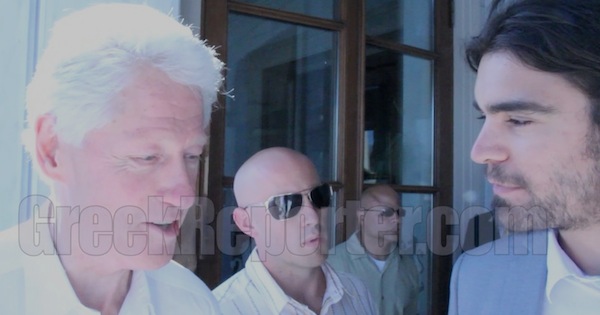 Former U.S. President Bill Clinton spoke exclusively to Greek Reporter emphasizing the need for Greece to move away from austerity and invest in the younger generation.
The former president’s visit to Greece was a statement to those that suggest that Greece might not be safe at this time of crisis.
Watch the video below:
[youtube]kw8ir1KQApg[/youtube]
“It’s always great to be in Greece and I believe that the country is a very welcoming destination for everybody,” he commented to Greek Reporter.
Speaking about the Greek crisis, he said that Greece needs to move away from austerity and believe in its young generation again.
The former president visited the Greek capital as a guest of The Hellenic Initiative, an organization formed by prominent Greeks of the diaspora with the aim of helping the crisis-hit country by providing funds to charity and attract investment.
Meeting with Greek Prime Minister
Meeting with visiting former U.S. President Bill Clinton, who came to Greece with a group of influential Greek-American leaders to discuss programs to help Greek charities and spur the country’s economy, new Prime Minister Antonis Samaras told him that the country, reeling in a five-year-long economic downturn, is really in a “Great Depression,” similar to the dustbowl years of the 1930’s in the United States. Clinton told him that austerity measures demanded by the country’s international lenders were failing.
Samaras’ comments came just two days before inspectors from international lenders were due to meet with him to discuss delays in imposing more austerity measures and another $15 billion in cuts to keep rescue fund lifelines open.
The Troika of the European Union-International Monetary Fund-European Central Bank (EU-IMF-ECB) is loaning Greece $152 billion in a first bailout but withholding the second, worth $173 billion, until Samaras’ coalition government makes more reforms. The IMF is reportedly ready to pull the plug on its participation, which could make Greece default its loans as early as September, a scenario that could plunge the country, already suffering 22.5 percent unemployment, with an economy shrinking by 6.7 percent and 1,000 businesses a week closing, into complete chaos.
The Troika insisted on deep pay cuts, big tax hikes and slashed pensions despite evidence that the austerity measures have cut consumer spending so much that tax revenues are declining, not increasing, and causing many Greeks, especially the young who have an unemployment rate of more than 50 percent, to flee the country.
Clinton criticized Greece’s lenders for focusing excessively on austerity, saying Athens will be more likely to repay its debt if its manages economic recovery first. “(It) is self-defeating… if every day people are saying this may or may not work to give us back a 100 cents on the dollar, so give us more austerity today,” he told Samaras. “People need something to look forward to when they get up in the morning — young Greeks need something to believe in so they can stake their future out here,” Clinton said.
Samaras has waffled on whether he wants to renegotiate the terms, although he said during the run-up to the June 17 campaign that he did, but then said he didn’t, and then changed his mind again, under pressure from his coalition partners and otherwise rivals, the PASOK Socialists and tiny Democratic Left.
“You had the Great Depression in the United States,” Samaras told Clinton. “This is exactly what we’re going through in Greece – it’s our version of the Great Depression.” It’s likely to get worse as the German magazine Der Spiegel said Greece needs a third bailout of between 10-50 billion euros, or $12.15-$60.7 billion, and there isn’t even enough money to meet an August loan payment of $3.8 billion.