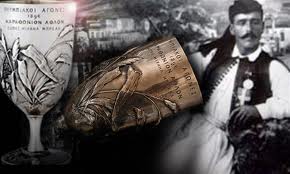 In September 2012, the Athens-based Acropolis Museum will exhibit the silver trophy awarded to Marathon runner Spyros Louis who participated in the first modern Olympic Games in 1896, announced the Stavros Niarchos foundation.
On April 18th, the Stavros Niarchos Foundation announced that it had acquired in auction Bréal’s Silver Cup. The announcement was accompanied by the Foundation’s public commitment to make the Cup accessible to everyone, by placing it on permanent display at the Stavros Niarchos Foundation Cultural Center (SNFCC), which is expected to be completed in 2015.
The exhibit will include audio-visual and printed informational material on the Cup to help enhance the visitors’ experience and understanding since Spyros Louis is Greece’s modern Olympics symbol since he was the first Marathon champion.