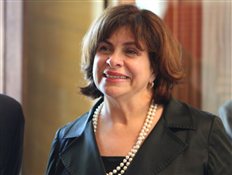 Jurist Andromache Karakatsanis is the daughter of Greek migrants from the Prefecture of Macedonia, Northern Greece. Born in Canada and raised with an emphasis on her Greek heritage, Karakatsanis has been recently elected as the first Greek-Canadian judge in the Supreme Court of Canada.

She grew up near the Don Mills Rd. and Lawrence Ave. area of Toronto, where her parents owned a restaurant called “Top of the Mall” which was where Karakatsanis got her start as a waitress serving souvlaki. She attended Victoria College at the University of Toronto, graduating with a B.A. in English literature in 1977. She then received her legal training at York University’s Osgoode Hall Law School, receiving her LL.B. in 1980. She was called to the Ontario bar in 1982.

After her call to the bar, Karakatsanis clerked for the judges of the Ontario Court of Appeal from 1982–1983, after which she entered private practice. In 1987, Karakatsanis was appointed to the Liquor Licensing Board of Ontario as Vice-Chair, becoming Chair and CEO the following year. She held that position until her 1995 appointment as Assistant Deputy Attorney General and Secretary of the Ontario Native Affairs Secretariat. Karakatsanis was named Deputy Attorney General for the province of Ontario in 1997, and she became Secretary of the Cabinet and Clerk of the Executive Council of the Government of Ontario in 2000.

Justice Karakatsanis’s judicial career began when she was appointed to the Ontario Superior Court of Justice in December 2002, where she developed an expertise in administrative law. She was subsequently elevated to the Ontario Court of Appeal on March 26, 2010, where she served for 19 months prior to her appointment to the Supreme Court.

Last week Karakatsanis traveled to Greece in order to express her full support towards the Greek people and the harsh times they are going through amidst the past years’ recession. Proud to be raised as a Greek-Canadian, Karakatsanis commented on the benefits her double nationality held for her and her job.

Last Tuesday afternoon, Karakatsanis and her husband Tom Karvanis met with the President of the Hellenic Republic Karolos Papoulias. Papoulias congratulated both Greek-Canadians for their contribution to spreading the Greek language in the Diaspora of Canada, while he also asked to be informed about the progress of Greek studies in Canadian institutions.