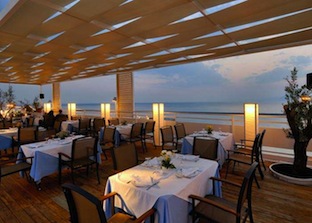 Greece’s catering and tourist industry employees called a 24-hour strike for June 27 to protest measures, including wage cuts, demanded in exchange for a second international bailout for the country.
“Employees are blatantly using the avalanche of measures, which are crushing the human and social rights of workers, to violently demand submission to their demands,” the Panhellenic Federation of Catering and Tourist Industry Employees said in a statement on its website today.
The strike comes in one of the key months for tourism, Greece’s biggest industry. Tourism accounted for almost 16 percent of gross domestic product and almost one in five jobs in Greece in 2011, according to the London-based World Travel and Tourism Council.
“Every euro they take away from workers doesn’t only affect them and their families but also brings closer the collapse of pension funds, the economy and society,” the association said. The “third-world salaries and galley conditions” include 12-hour work days six to seven days a week with salaries of as low as 511 euros a month, the group added.
The federation also plans a 48-hour strike starting July 11, Athens News Agency reported, without citing anyone.
(source: Bloomberg)

If a new law being drafted in Athens is passed, owners of a legendary breed of Greek hunting dog may be forced to retreat into the wilderness.
Greece