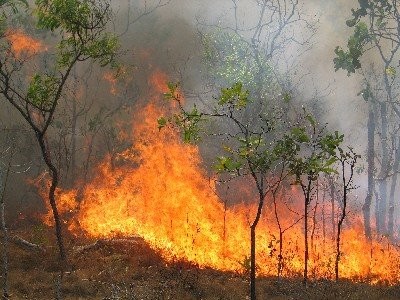 A fire aided by strong winds has burned several houses near the town of Keratea, 50 kilometers (30 miles) south of Athens, authorities said Saturday. Two firefighters have been injured, one with extensive burns, but no civilian casualties have been reported.
The blaze started Saturday afternoon on dried grass, apparently as the result of an accident and was spreading fast, engulfing four isolated houses on the outskirts of the towns of Keratea and Palea Fokaia and threatening others.
Because of the high winds, two firefighting planes sent to help put out the fire were unable to operate and replaced by one helicopter and four newer planes, according to a statement by the fire brigade. It said 74 firefighting vehicles were operating on the ground.
Firefighters called the situation “hellish” and said the fire will not stop until it reaches the sea, about 5 kilometers (3 miles) southwest. An old peoples’ home was evacuated and its 42 residents moved to a nearby resort, authorities said.
At least three smaller fires were burning near Athens late Saturday afternoon. One, in the district of Pallini, just east of the capital, started in dry grass and was threatening an ice cream factory. Vans outside the factory went up in flames.
Two other fires broke out in the northwest and southeast corners of the southern Greek Peloponnese peninsula, requiring dozens of fire vehicles to rush to the scenes.
The prevailing weather in Greece has been hot and dry recently and although temperatures have decreased somewhat, winds have picked up, leading authorities to issue warnings just hours before the fire broke out.
(source: AP)