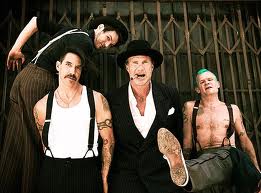 It has almost become an urban legend in Greece, but finally, after many years of rumors and talks, famous LA rock band Red Hot Chili Peppers is visiting Greece for the first time this year for a one night only concert that is expected to gather fans from all across Greece.
Live Nation and Big Star Touring are presenting the American band in a live performance to be hosted at the Olympic Athletic Center of Athens (OAKA) on Tuesday, September 4.
Being presented 7 times with Grammy Awards and having sold more than 70 million albums worldwide, Anthony Kiedis (vocals), Michael “Flea” Balzary (bass), longtime drummer Chad Smith, and new guitarist Josh Klinghoffer, who joined in late 2009 and replaced John Frusciante, will finally perform live before a Greek audience, which has waited for years for their tour list to include Athens.
The Red Hot Chili Peppers was formed by singer Anthony Kiedis, guitarist Hillel Slovak, bassist Flea and drummer Jack Irons while they attended Fairfax High School in Los Angeles in 1983. One year later, they released their first album.
In 1991, Blood Sugar Sex Magik made them popular around the world and sold more than 13 million copies. “Give It Away” was released as the first single; it eventually became one of the band’s biggest and most well known songs, won a Grammy Award in 1992 for “Best Hard Rock Performance With Vocal” and became the band’s first number one single on the Modern Rock chart. The ballad “Under the Bridge” was released as a second single, and went on to reach No.2 on the Billboard Hot 100 chart, the highest the band has reached on that chart as of 2011 and became one of the band’s most recognizable songs.
In 1999, Californication was released as the band’s seventh studio album. The album ultimately sold over 15 million copies and became the band’s most successful recording to date. Californication contained fewer rap-driven songs than its predecessors, instead integrating textured, consistent, and melodic guitar riffs, vocals and bass-lines.
By The Way was released three years after and produced four singles: “By the Way,” “The Zephyr Song,” “Can’t Stop” and “Universally Speaking.” The album brought a change in their musical style and was followed by an eighteen month-long world tour. The European leg of the By the Way tour produced the band’s second full-length concert DVD, Live at Slane Castle, recorded at Slane Castle in Ireland on August 23, 2003. The band released their first full-length live album, Live in Hyde Park, recorded during their performances in Hyde Park, London. More than 258,000 fans paid over $17,100,000 for tickets over three nights, a 2004 record; the event ranked No.1 on Billboard’s Top Concert Boxscores of 2004.
I’m with You, the band’s tenth studio album was released in the United States in August 2011. The album topped the charts in 18 different countries and received positive reviews.
Their unique style of music comprising rock, funk, psychedelic and punk sounds along with their vigorous stage performances is a mix guaranteeing an unprecedented event of live rock music in the city of Athens this year.
Tickets are already being sold in advance.

The Ancient Greek Lexicon Published after 23 Years in the Making

The Globetrotting Greek Family Sharing Their Travels on YouTube