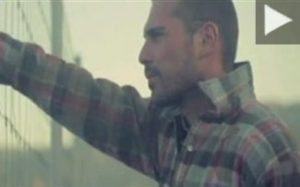 For those who remember Anthimos Ananiadis, or Anthem Moss as he is widely known, starring in a Greek TV series, it might be difficult to recognize him at first.

The young actor stars in the American thriller “The Quiet Land,” directed by Bradley W. Ragland. He has shaved hair and a more macho appearance, which fits perfectly with his new role.

The 27-year-old actor left Greece some years ago to make his dreams come true in Hollywood. As it seems, he is doing pretty well.

“The Quiet Land” is a Hollywood production that is characterized as a “romantic thriller.” Anthem appears in the trailer with a shotgun between his hands. He stars as a man who has to face the biggest battle of his life and must choose between his son’s life and his great love.

Moss has already taken major steps in his career. He hunts his dreams, and gets success in return. “In America, they respect passion,” comments the Greek actor. This may be the reason why he managed to become the main figure of a Levi’s jeans advertisement in the USA.

“When I approached the building of the audition, there were about 2,000 outside waiting, but I didn’t leave because I believe in myself,” explained Moss and as it seems, many other successful professionals believe in him as well.