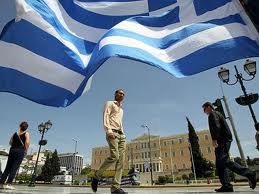 Amid threats and blackmails, Greek citizens are called to vote in a general atmosphere of uncertainty and fear. Falsified dilemmas, mainly projected by PASOK and ND, such as the “drachma or euro prospect of prosperity or poverty,” and “stability or anarchy?” attempt to trap Greek voters once again. The EU and the IMF don’t even want to think about what would happen with a weak government and successive catastrophic elections. Both Brussels and the IMF monitor the election campaign in Greece on a daily basis and analyze the statements of the political leaders word for word. The troika is rather concerned with the unrealistic promises heard by Greek politicians as they undermine and jeopardize the practical application of the obligations the country has undertaken.
The nation’s eurozone partners have made clear that they want Greece’s current socialist government and its conservative opponents to unite behind yet another program of tax increases, spending curbs, public sector job cuts and privatization agreed with the European Union and International Monetary Fund. International lenders are counting on PASOK’s Evangelos Venizelos, and Antonis Samaras, the centre-right leader, to renew their coalition after the election with the aim of hauling the country out of recession.The Director of the International Monetary Fund (IMF) Cristine Lagarde went as far as calling on Greek electors not to vote for extremist political parties and on politicians to show a sense of responsibility.
But many skeptical voters see another PASOK-New Democracy coalition as more of the same, with Brussels and the IMF still having the whip hand. The real government would remain outside Greece. The Hellenic Republic becomes, even officially, a government committed exclusively to the profits of national and international bankers and Greek people are being blackmailed to vote for the same people that caused this financial tragedy in order to vote for even more austerity measures and “save” them again.
Recent polls clearly indicate the collapse of the two major parties and the reinforcement of the left-wing and of those against the country’s “financial recovery plan” agreed by Greece’s international lenders and the national rescue government. The experience of two years under the financial supervision of the troika, and of consecutive and severe austerity programs has resulted to a meltdown of illusions about “Europeanism.” Despite the propaganda by the mainstream media, the constant blackmail “you either apply new measures or you are out of the Euro” no longer works as the majority of Greeks no longer believe that the measures imposed by the EU and the IMF will help the country. In fact, under the current austerity offensive and the dead end into which the powers are driving the Greek economy, such an outcome (default and ejection from the Euro) appears a near certainty anyway. This is the reason why the left parties keep rising in the polls and the reason Lagarde and Merkel appear so worried about the forthcoming elections outcome.