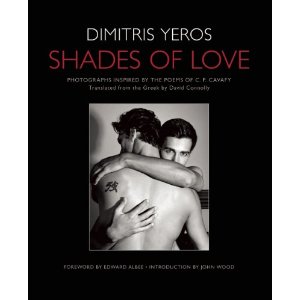 The book Shades of Love, with photographs of renowned painter and photographer Dimitris Yeros has made it to the shortlist of top ten books honored by the American Library Association’s Over the Rainbow Books.

The 170-page long collection of photographs inspired by the classic poems of one of Greece’s greatest writers, Constantine P. Cavafy, has been out in bookstores for a year now by Insight Editions, California.

Yeros has produced nearly seventy photographic illustrations using a mixture of models and fellow members of the artistic community.

The books’ foreword belongs to Edward Albee, one of the most important contemporary American dramatists, and the introduction to American poet and arts reviewer John Wood. According to the latter, there is “certainly no contemporary photographer more poetic in the larger contexts of the term than Dimitris Yeros is, but he is also poetic in the smallest and most technical contexts, as well. In these photographs he does not focus on the complete poem, Cavafy’s full narrative of the event, but on its most shimmering moment. These photographs then are synecdoches, classic poetic and rhetorical figures in which a part is used to suggest the whole….Yeros has created one of the most lyrical evocations of masculinity within the photographic arts.”

Being an admirer of Cavafy’s work, Yero’s photographs in Shades of Love were taken over several years in which the artist worked with models from a group of, as he puts it, “friends and acquaintances whose life or work was somehow connected with Cavafy.”

Among Yeros’s models are prominent members of the artistic community such as Jeff Koons, Gabriel Garcia Marquez, Gore Vidal, Tom Wesselmann and Clive Barker – these notable names springing from the idea to use “people from the world of letters and the arts…who knew and admired Cavafy’s poetry.”

In addition to its visual richness, the book presents new English poetic translation of Cavafy by David Connolly, award-winning translator and professor of translation at the Aristotle University of Thessaloniki.

Dimitris Yeros was born in Greece. He was one of the first artists to present Performances, Body Art, Video Art, and Mail Art in Greece. He has had 52 individual exhibitions in Greece and abroad. He has also participated in numerous international group exhibitions, Biennales and Triennales in many parts of the world. His collaborations include John Stevenson Gallery, and Throckmorton Fine Arts in New York, Holden Luntz gallery in Palm Beach, Vance Martin Fine Arts in San Francisco and Kapopoulos Fine Art in Athens.