The Greek Fast: Appetizing and Healthy 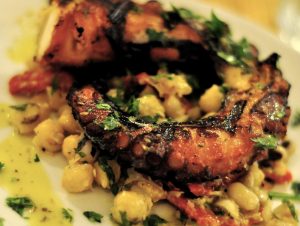 The Greek-Orthodox fasting season is well underway. The word “fasting” is usually associated with liquid only diets or other strict ways of eating. This type of fasting however is a bit more lenient and tasty; The Christian Greek Orthodox fasting practice is unique in that you can actually eat real food; they only need to avoid animal products. While other religious fasting practices may promote an unbalanced way of eating, this fast has been studied and has specific health benefits.
Research shows that individuals who follow a Greek Orthodox fast have a lower intake of saturated fat, total fat and calories and a higher intake of fiber, a combination that protects from heart disease and cancer. In addition, studies have shown the non-animal protein sources such as legumes and nuts are healthier than animal protein sources due to their fiber and antioxidant content, but also effective for weight loss due to their low fat content. Deficiencies are rare with this pattern of eating. A study by British and Greek researchers showed that individuals who were following a Greek Orthodox fast, actually had higher levels of iron intake compared to those who were not fasting.
In recent years there are very few people that avoid animal products for 40+ days and it is a rare event when someone avoids olive oil during the week. Mostly Christian Greek Orthodox nuns and monks follow a strict religious fast. Today most people only fast the week before Easter, and it’s hardly a test of self-restraint since there are so many products out on the market such as “vegetarian” cheese, chocolate, milk (soy, rice) etc. Avoiding animal products just for the sake of avoiding them while replacing them with other substitutes misses the point, not only spiritually but also nutritionally. The health benefits of the Greek Orthodox fast come from the increased intake of fruits, vegetables, beans and good fats from nuts, seeds and olive oil and a lower intake of calories. Unfortunately a diet rich in processed foods even if they have no animal products in them will not provide the expected benefits.
A strict fast without olive oil may not be feasible for most of us, but it’s worth trying to follow a vegetable based diet with a hint of seafood. Greeks may believe it’s good for your soul, but science says that it’s good for your health.
Elena Paravantes is a Greek-American Registered Dietitian-Nutritionist, writer and  founder of olivetomato.com a blog about the Greek Diet and Greek Food.
Photo Credit: Grilled Octopus on Bean Salad by Karen Blumberg