GRNews
GreekReporter.comEuropeThe Secrets of the Temple of Demeter Found in Ancient Greek Ruins... 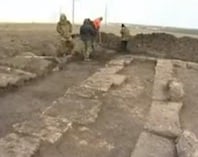 The discovery of the Temple of Demeter, that was found in ancient Greek ruins in Taman of South Russia last spring, has become the centre of attention among archaelogists and experts.

According to the news website ‘greek.ruvr.ru’,  it is assumed that the temple of Demeter is the place where the Eleusinian Mysteries were being held every year for the cult of Demeter and Persephone, based in Eleusis of ancient Greece.

The head of the excavations, Nikolai Sudaref, believes that further excavations will reveal that the temple found last spring constitutes only a part of the place of worship.

“This temple is an extraordinary construction and was built by eminent architects using public expenditures. Undoubtedly it’s a qualitative work”, the Russian archaeologist emphasizes.

According to mythology, the Eleusinian mysteries represented the myth of the abduction of Persephone  from her mother Demeter by the king of the underworld Hades, in a cycle with three phases, the “descent” (loss), the “search” and the “ascent”, with the main theme the “ascent” of Persephone and the reunion with her mother. It was a major festival during the Hellenic era, and later spread to Rome.

Nikolai Sudaref concludes that the Eleusinian mysteries were a ticket to the paradise that the underworld Hades offered.