GRNews
GreekReporter.comEuropeHighlights of Meeting Between Greek PM And FYROM PM in Brussels

Highlights of Meeting Between Greek PM And FYROM PM in Brussels 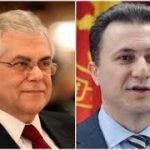 The recent meeting between the Greek Prime Minister Lucas Papademos and the FYROM Prime Minister in Brussels had an informative and serious character, as it addressed some aspects of the name issue, imposed by the southern neighbour, Premier Nikola Gruevski told reporters on Saturday.

“The meeting had a serious character, an acquainting one – considering that it was our first encounter, while the informative part was related to reviewing the course of developments in the past. There was also a bit of essence when we talked about certain aspects of the (name) problem,” said Gruevski, who today attended a ceremony in honor of handing over the first 40 certificates for national pensions to FYROM artists.

He revealed no more details about the meeting, as it was the first one between the two PMs.

“I would like to wait for the feedback from this meeting. We should wait for several weeks and see whether it will bring some positive response, which will boost our future contacts and produce a result to the satisfaction of both countries,” Gruevski said.

For Gruevski, the high-level dialogue with the European Union, which will be launched on March 15 in Skopje, is an excellent opportunity for FYROM, especially in a period when the country is being prevented to start the accession negotiations.

“I am very pleased that last year in Ohrid we agreed with European Commission President Jose Manuel Barroso and Enlargement Commissioner Stefan Fule to start a process that will really push the country forward until a settling of the matters regarding the blockade of our southern neighbour to the (opening of FYROM’s accession talks),” Gruevski said.

The real moving forward, he said, will mean that once the blockade is lifted, the largest part of what is to be negotiated and fulfilled, will probably be already done before the start of FYROM’s EU accession talks.

The main topics could be opened during the dialogue, Gruevski said, pointing out that FYROM also expects the EU to offer new ideas and assistance, to intensify the reforms in favor of the country’s overall progress, including the life of its citizens.