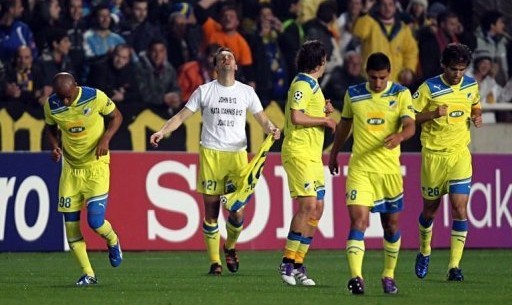 Apoel Nicosia reached the Champions League quarter-finals for the first time on Wednesday after beating Lyon 4-3 in a penalty shootout in their last 16, second leg tie. Apoel won 1-0 on the night for a 1-1 aggregate before extra-time failed to separate the two sides. Tthe UEFA Champions League football match between Apoel Nicosia and Olympique Lyonnais took place at the GSP Stadium in the Cypriot capital.
Lyon’s Alexandre Lacazette and Michel Bastos had the key spot-kicks saved by Dionisios Chiotis, who was also unlucky that Lisandro Lopez’s penalty went in off his back, to prompt jubilant scenes in Nicosia.
Gustavo Manduca, sent off in extra time for a second booking, had earlier netted at the far post on nine minutes after Constantinos Charalambides had slid in a cross as hosts APOEL levelled the aggregate scores at 1-1 after losing the first leg 1-0.
Lyon, who came into the game on the back of poor domestic form, fielded a defensive lineup with first-leg scorer Lacazette and top scorer Bafetimbi Gomis starting on the bench.
Manduca’s goal forced under pressure Lyon coach Remi Garde to urge his side forward and Ederson’s overhit free kick almost sneaked in before his diving header bounced wide but that was as close as the French side came.
APOEL, who upset the odds by finishing top of their Champions League group but lie third domestically, had set up with a more attacking side but gradually began to sit back after the early advantage with their dogged defence again on show.
The home side still had other chances with Charalambides blasting wide from a difficult angle, Esteban Solari’s shot being saved by Hugo Lloris and Lyon’s Aly Cissokho flicking a free kick onto his own bar.
Lyon shaded extra time with Gomis and Lacazette on the field but APOEL also got forward and wasted decent opportunities.
The buildup to the match was far from smooth with vandals trying to dig up the pitch on Tuesday, the officials having a flat tire en route to the game and rain welcoming the players before kick of.
An electric atmosphere inside the GSP Stadium made up for the weather with the second highest APOEL crowd ever of nearly 23,000 packing the stands.