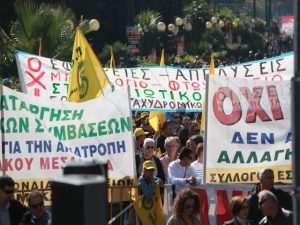 With a three-hour long work stoppage from 12:00 noon to 3pm, Greek trade unions GSEE and ADEDY will join the Decentralized European Day of Action on February 29.
At 1:30pm onFebruary 29, members of the two Greek trade unions will also hold a protest in the offices of the EU Delegation in Athens.
At 6pm a rally and a protest concert will take place in Syntagma Square, outside the Greek parliament. The mobilization events are co-organized by GSEE, ADEDY, the Technical Chamber, the Athenian Lawyers Union and the Athens Doctors Union.
European trade unions from all countries will be mobilizing on that day in order to point out that other solutions exist besides austerity. With the slogan “Enough is enough! Alternatives to austerity do exist. For employment and social justice” the trade unions will hold their mobilizations on the eve of the European Council’s meeting on March 1-2.

The number of coronavirus cases surged today in Greece, as a total of 2,353 cases of the virus were diagnosed across the country on...
Food