The Τhree Delicacies of Clean Monday: Lagana, Halvas and Taramas

(original story in Greek by Inga Athanasiadou)
Lagana, halvas, and taramas is the food of the day on Clean Monday, or else known as “the Koulouma”. Bearing the same meaning as Ash Wednesday for the Catholics, the Greek Orthodox Day marking the beginning of Lent is connected to different customs across Greece, with the most important ones being the flying kites, the outdoors excursions and the particular delicacies, which date back to old times.

But why do we eat this particular food on this day? Do we really know what these food stands for? And why is it that we only eat this type of bread, Lagana, on Clean Monday?
Clean Monday is the first day of the 40 Days of Lent, celebrated by the Orthodox Church. It is the marking of the preparation period for the believers before the advent of Easter. Thus, the first week of the 40 Days is called “Clean Week”, and gives the believer adequate time to purify himself and get ready for the most important holiday of Christendom, Easter.
The Lagana is a a special kind of azyme (no yeast) bread, baked only on that day, and symbolizes the help offered by God to the Israeli people while leading them away from Egypt to the promised land. 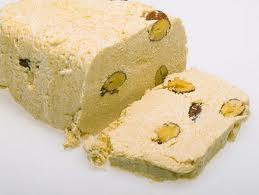 The semolina halvas is a common food found around the Balkan countries and Turkey, and is usually home made. It is a very plain sweet and dense confection of sesame, sugar, water and oil. The baked sesame is given a round shape and is then sugared either with honey or “petimezi”, the syrup made of must from grapes.
For the Greeks, halvas is one of the Lent desserts and its recipe is altered with the addition of tahini, or else sesame paste, and is baked in a square or cylindrical shape. This type of halvas is called Macedonian Halvas and has many different flavors. The Greeks eat halvas with a glass of retsina and cinnamon.

Taramas is the word the Greeks use to describe the small salted beads of red caviar (fish roe) of cod or carp, and which, just like the black caviar and botargo (avgotaracho), is considered to be one of the top fish roe to be savored.
The appreciation of fish roe dates back to the Byzantium. Taramas is widely known for its usage in the recipe of taramosalata, a mix of roe with either bread crumbs or mashed potato, and lemon juice, vinegar and olive oil. It is usually eaten as a dip, with bread or raw vegetables. The colour can vary from creamy beige to pink, depending on the type of roe used. Mass-produced taramosalata is often a bright pink due to the addition of food colouring. The white colored one is considered of higher quality.