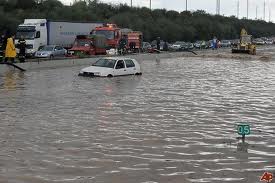 After the disastrous rainfall in the Prefecture of Ilia that left one woman dead and severe damage to several houses, shops and crops, the adverse weather has reached the Periphery of Eastern Macedonia-Thrace.
Unprecedented floods covered the plain of the city of Xanthi on Monday, and according to the Mayor Vasilis Tsolakidis, the large-scale devastation from the excessively bad weather conditions is particularly evident on crops, schools and farms.
The use of motor vehicles has been restored across the biggest part of the peripheral road network since early in the morning, after the massive landslides.
According to AMNA, the Eastern Macedonia-Thrace periphery and the municipalities in Evros prefecture were placed on flood alert on Sunday as substantial quantities of water continued to flow over the dams along the shared river in Bulgaria.

Bulgarian authorities informed their Greek counterparts on Saturday morning of the danger of flood water due to torrential rainfall and heavy snow.
According to Bloomberg, Bulgaria’s southern cities of Haskovo, Harmanli and Kardjali near the Greek and Turkish borders declared a state of emergency as nine small water reservoirs are spilling over after snow and rainfall in the past two days exceeded 200 liters per square meter.