TechNews
GreekReporter.com Greek News Economy Bloomberg: ECB Says "No" to Haircut on its Own Greek Debt

Bloomberg: ECB Says "No" to Haircut on its Own Greek Debt 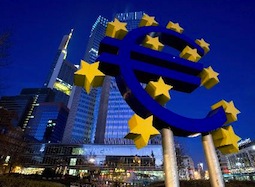 The European Central Bank remains firmly opposed to any restructuring of its Greek bond holdings, as the debt was acquired for monetary policy purposes, according to Bloomberg, citing two people familiar with the Governing Council’s stance.
While the ECB faces pressure to join private-sector investors in taking losses on Greek debt, the central bank sees this as potentially damaging to confidence in the institution if it were to take part, said the insiders, who declined to be identified because the matter is confidential.
International Monetary Fund Managing Director Christine Lagarde said today that European governments and other public holders of Greek debt may have to increase support if private creditors don’t go far enough. Investors and European finance ministers remain at odds over how much private investors should shoulder the Greek bailout.
“Once again, policy makers leave the room and hope the ECB will fill in,” said Thomas Costerg, an economist at Standard Chartered Bank in London. “The risk is that by putting the ECB on board, as the IMF asks, this could result in debt swap negotiations restarting from scratch, which could mean additional delays to an already over-stretched timetable.”
German Chancellor Angela Merkel’s government will oppose any attempt to make the ECB accept a writedown on its Greek bonds, senior coalition lawmaker Michael Meister said in an interview today.
(source: capital)