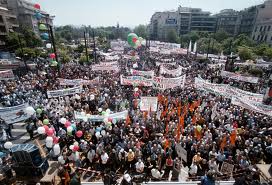 Private sector union GSEE called for an Athens-wide, 48-hour strike that will start Tuesday, January 17, and end Wednesday, January 18.
The broader region of Attica will once again be paralyzed as public transportation employees will walk off their job on these two days, with hospital doctors, lawyers, OME-OTE employees and journalists joining the two-day long walkout.
The Unions will gather tomorrow at 11:00 at Klafthmonos Square, while at the same time PAME will hold its rally at Omonoia Square.
Employees and workers of Attica Prefecture have issued a formal announcement declaring that the Athens-wide strike is a straight message against the anti-social policy of the government, the Troika and employers, who are trying to impose harsh, anti-labour measures with the threat of interventions in or annulments of collective labour agreements.
All Metro stations (red and blue lines) will remain closed on Tuesday, while buses and trolleys will only work from 05:00 to 22:00.
Athens Elektrikos /ISAP (green line of Metro) will work from 09:00 to 21:00 and Athens tram will work from 08:00 to 22:00.
The suburban railway will only work from 07:00 to 10:00 and 13:00 to 22:00 to accommodate commuters and protesters.
POESY Journalists’ union has called for a 2-day-long strike of all private and public press and electronic mass media, starting from Tuesday and ending on Thursday.
The Union demands the revocation of releases made in all mass media, no further releases, protection of the collective public good of information, the signing of collective labour agreements, and the end of fixed-term employment contracts for journalists.