Financial Post Reports Greeks are Far From Laziest In EU 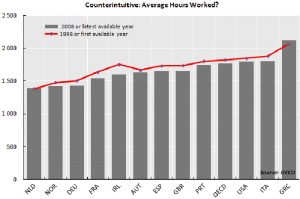 Canadian daily Financial Post has published a report shattering the myth of the Greek people being the laziest within the EU.

According to the Canadian newspaper, Greece has become a scapegoat for Europe for the past years with politicians, experts and simple people describing the Greeks as being lazy and working fewer hours than people of the northern Member-States.

This stereotype has been dismissed as untrue time and again. The Financial Post refers to March Chandler, global head of currency strategy in NY, “who points out in his latest commentary that employment data shows Greeks are by far one of the hardest working nationalities in Europe”.

Presenting a chart with the employment data from the Organisation for Economic Co-operation and Development (OECD), the US expert shows that Greeks worked on average 2120 hours in 2008. “That was 48% longer than Germans, who worked 1429 hours. Surprisingly, even Italians, with 1802 hours spent at work, outworked the Germans” reported Financial Post.

The Canadian newspaper explains that despite their hard labor, the Greek and Italian economies are failing, while the Northern ones are thriving because they do not require that much hard work but rather, “smart” work.

Meze: Small Greek Dishes that are Perfect for Food Lovers