It doesn’t look like his split from wife Demi Moore is getting Ashton Kutcher down. TheTwo and a Half Men star  has been partying like crazy  for the past week in Athens  with actress Lorene Scafaria .  Ashton and Lorene went to one of Athen’s top “mpouzoukia” singer, Panos Kiamos, threw flowers around and  danced tsifteteli (!) . According to Greek media Kutcher sang along Kiamos’ hit “Σφύριξα κι έληξες” ( I blew the whistle – you are over) which basically  shares  football connotations  – the referee blows the whistle and the game is over- to ex wife  Demi Moor.  Ashton and his new girlfriend  also visited Athens celeb hot spot club Villa Mercedes where they also got  down to some serious partying (again). 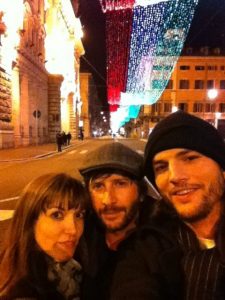 The recently separated 34-year-old actor, whose estranged wife Demi Moore announced her intent to divorce in November, raised eyebrows when he tweeted a photo of himself along with actress/writer/director Lorene Scafaria in central Athens. Kutcher sent out the pic with the caption, “Roman holiday with homies. Have an amazing new year!”. The two weren’t alone, as Kutcher’s business partner Matt Mazznat  is also seen with them. Nonetheless, the rumor mill churned, and a rep for the star says there’s no truth to the gossip that he’s moved on from Moore with Scafaria. “They are just friends,” the rep tells People magazine, adding that the pair are “working on a potential project together about an Italian soccer team.”