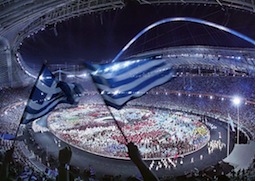 Greece’s hosting of the 2004 Athens Olympics contributed to the country’s massive debt, the head of the International Olympic Committee Jacques Rogge told a Greek daily newspaper Tuesday.
‘You can fairly say that the 2004 Games played their part. If you look at the external debt of Greece, there could be up to 2 to 3 per cent of that which could be attributed to the Games,’ Rogge told the Greek daily newspaper Kathimerini.
‘It could have been staged at a much lower cost, as there were delays that rendered double shifts necessary, and having people work at night does cost more,’ Rogge said.
Rogge, who was in Athens earlier this month for the lightening ceremony for the 2012 Winter Youth Olympic Games in Innsbruck, also said that the post-Game utilization of the installations should have been prepared better.
Greece is heading for its worst-ever recession this year, with the contraction in the Eurozone member to exceed a previously forecast 5.5 per cent.
Athens is negotiating the details of a second, 130-billion-euro (174-billion-dollar) rescue loan deal agreed to in October, which includes provisions to write off 50 per cent of the value of Greek bonds held by private creditors.
Greece received a first, 110-billion-euro (147-billion-dollar) bailout package from its international partners in May 2010, preventing the country from going bankrupt.
In return, Greece imposed a series of tough austerity measures to cut its budget deficit.
(source: DPA)