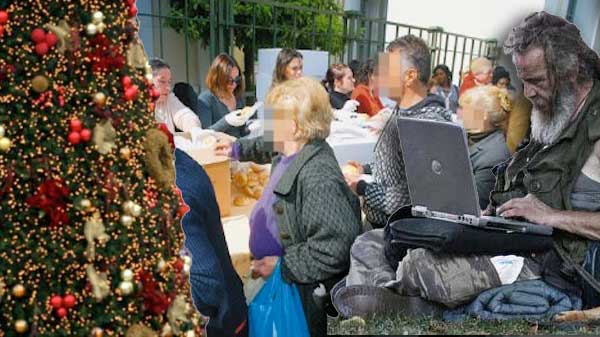 Just a few days short of Christmas, thousands line up in front of food banks and resort to rifling through rubbish bins. Anger, misery, frustration and fear are evident in every little corner of Athens. Athenians look at the new cast of homeless in their work suits and once polished shoes begging for money, and feel pure terror that the next wave of homeless will include them, their brother or their neighbor. Senior members of the population compare the situation to  scenes of the Second World War and the German occupation of the country. According to data released by Greece’s National Confederation for Commerce, nine Greeks out of ten have cancelled all expenditure on clothing while one Greek in four says that their money will not cover the purchase of basic food items, let alone Christmas gifts and celebrations.
Homeless in suits with laptops and degrees  from Voula and … Kifisia
Greece’s former middle class is rapidly vanishing and is giving its place to a new Greek underclass, the so called “νεόπτωχοι”-newly poor people. This new underclass is comprised of jobless, homeless and hopeless Greeks, who up to a couple of years ago had a job, a home, and hope for a better future.  This new social class is visible throughout Athens.  They sleep in park benches and wander around from welfare office to welfare office for a free meal or some new clothes. Athens’ municipality and NGOs estimate the homeless increase within a year is approximately 25 percent.
But these are no ordinary homeless people. With an average age of 47, 11% of Greece’s homeless have a university degree (!) and 23.5% hold a high school diploma, while only 9.3% are illiterate. The new Greek homeless class members have laptops and iPhones, remnants of their “old” lives. “They come to us in suits with their laptops in hand. These citizens a couple of months ago had ordinary lives. They had a job, a home and car,” says Nikitas Kanakis, the head of Doctors Without Borders in Athens. Counselors from the Department of Homeless Services describe a similar situation. “We even have homeless from suburbs like Kifisia and Voula! They come  here with their laptops and expensive smart phones they once used for their work, shocked and depressed”.
These homeless are not drug addicts or immigrants or people who were always deprived. They are former teachers, doctors, economists, secretaries – the list goes on.  Their homelessness is not a result of poor backgrounds or a lack of skills and education; but rather, a result of the “crisis” that continues to play out on front page news, and has destroyed their lives for no reason.
Working and Homeless
Even those with a full time job could end up homeless without some sort of financial support from friends and family.  NGOs speak of a new generation of homeless who cannot even cover their basic needs, with a monthly salary of just 500 euro. At the same time, the average Greek consumer is now forced to pay the third-highest VAT rate in Europe, the third-highest social insurance contributions and the second-highest fuel taxes. No wonder the new homeless class continues to rapidly expand, along with provisional street homes made of wooden beams and plastic sheets, for shelter from the winter.
Tax Evaders are Crisis-Free
With an over bloated, corrupted, and ridiculously slow government administration, tax evaders have little to fear. In fact, tax evaders are probably the only Greek cast that doesn’t fear becoming homeless. They can still be seen throughout Athens in their Porsche Cayennes, at their favorite” bouzoukia” and designer clothes shops as if nothing has changed.  It is this injustice that incites the people of Greece to anger, and crushes the usually-cheery Christmas atmosphere in Athens at this time of year.