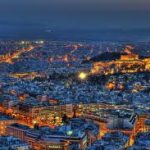 The Austrian Newspaper ‘Kleine Zeitung’ features the city of Athens in its recent publication, emphasizing that both Greece and Athens attract magically those who are interested in history, something that is more than expected.

The newspaper refers to the multidimensional character of Greece and Athens that is far away from economic crisis, sovereign default, and general strikes. Acropolis is also praised as the most significant monument of the metropolis of 5,000,000 people.

Moreover, ‘Kleine Zeitung’ underlines the importance of the Parthenon monument and the history of its construction.

Finally, the newspaper says that among the best cultural attractions of Greece are the Benaki Museum, he Byzantine and Christian Museum and the Museum of Cycladic Art.