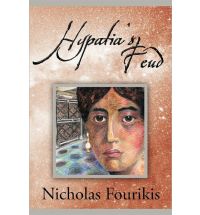 The book ‘Hypatia’s Feud’ from Nicholas Fourikis has been recently presented in Australia.  Hypatia researches the heavens and explores the everlasting questions of our existence when the Church preaches there is no need to probe into the nature of things. She imparts new knowledge to the world when the churchmen counsel women to seek knowledge from their husbands.

Her brilliant career as researcher, teacher and humanist convince every conservative in the Empire that women are not only intellectually equal to men but can also lead philosophers and astronomers.

Her feud with the Church reaches a climax during a debate with the Patriarch of Alexandria who believes the half a million pagan scrolls of the Royal Alexandrian Library prevent the populace from accepting Christianity.

Nicholas Fourikis, MSc PhD Nicholas turned to literary fiction after a distinguished career in Radio-astronomy culminating in the discovery of five interstellar molecules and the authoring of two University textbooks. In his first novel, Hollywood Amarroo, he chronicled the lives of two young lovers who ignored the prejudices of the sixties to defend an Aboriginal mother accused of manslaughter.

Nicholas spent several summers in Alexandria where Hypatia’s aura touched him. In troubled times we can always draw the strength to continue our struggle for a better world by re-visiting Hypatia’s life. She was after all the quintessential philosopher-hero who lived and died as a humanist in a world possessed by religious fervor.