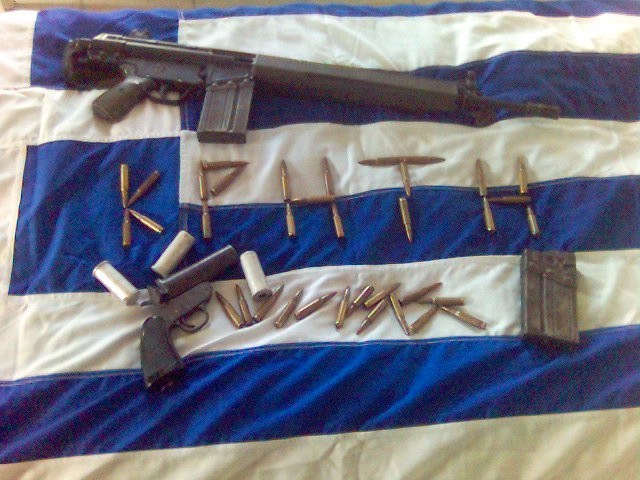 A new Cretan tragedy with a 53-year-old shot dead and an eighteen-year old heavily injured took place yesterday in Tsikalaria, a village near Chania revealing for once more the island’s ugly face.
The cycle of blood started from an ordinary fight between two teenage boys over a girl, and a school day that should have ended with nothing worse than a couple of “heavy words” saw a 53 year-old shot dead and an 17 year-old in the intensive care.
After returning home, one of the boys informed his father about the dispute. The father took his walking stick and went over the other boy’s family house “demanding an explanation”. At this point the tragedy’s first act begins with the main protagonists being the two fathers who wanted to resolve their sons’ dispute. At the sight of the 53-year-old holding his walking stick the 43-year-old father and house owner took his gun and shot in the air to scare him off.
But by tragic irony the bullet bounced off the ceiling and plunged right into his son’s neck instead. Seeing his bloodshed son lying on the floor, the 43-year-old went ballistic and shot the 53-year-old who died on the spot.
The 17-year old was transferred to the General Hospital of Chania while the shooter turned himself  in at the local police station. A while after the unconscionable shooting incident around thirty villagers and friends of the victim gathered up at the house where the tragedy unrolled but police had already arrived in order to prevent the beginning of a chain reaction of killings – the so-called- vendetta.
Crete: a tale of two faces
Crete’s two contradictory faces pretty much resemble one of those classical Greek masks representing Drama. On one side, a smiley face: a cosmopolitan island with an  annual rate of over 2,500,000 tourists from all over the world, with many universities and the highest per capita income in Greece. On the other, a grinning, crazy face with guns, drugs and a shady underworld that turns the beautiful island into a lawless region.
It is common knowledge that the illegal gun ownership in Crete is out of control- it has the highest gun ownership rate in the European Union. Some experts say the long tradition of opposing central authority – dating from centuries of Ottoman rule – is to blame for feeding this insane gun culture that has cost the island hundreds of human lives.
The island’s weapons amnesty has been nurtured through the years by -surprise, surprise- corrupted politicians. But it truly is inconceivable  how modern Cretans instead of  striping away the romantic myths about honour and revenge don’t realise the real-life impact that gun violence has on ordinary Cretan families. And it is sad and shocking that up on the mountains it is still  not unusual to see Cretans of 14 years of age that not only have their own gun but also carry it with them wherever they go, stuck into the belt of their trousers below their shirt.
From automatic pistols to the latest type of revolvers Cretans spend a fortune on their deadly gadgets using them when they get the chance. From  weddings,  and christenings to festivals, they even organise rough shooting matches, firing at whatever they see. The lax attitude to law enforcement and the culture of non-co-operation with the state has spawned a criminal enterprise making difficult the lives of the majority of Cretans  while the Greek state does what it does best: nothing.