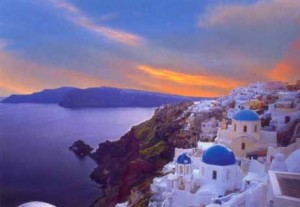 A new highly effective Greek tourism promotion trend has recently appeared in Australia.Greeks are the initiators of this trend, aiming to persuade Australian scientists, artists, and the members of creative communities to visit and enjoy inspirational Greece, where they can create art.

As it is widely known, Greek islands carry a unique beauty and constitute among others the main attraction for foreign painters.  In a 2008 edition of the magazine “Australian Artist” there is the following entry: Painting in the Greek Isles. Visit 4 unapproachable Greek islands with colourful fishing boats, dramatic mountains, domed monasteries, white- washed bougainvillea – covered lanes, dense olive groves filled with wildflowers, medieval fortresses and hidden turquoise coves, being accompanied by an experienced painting teacher.

The above described tour has a duration of 19 days and the land cost per person is $ 3,500. Diana Psaromati organizes 5 tours annually from April to October and even non-painters are most welcome in the tours.

Regina Hona, a professional artist especially known for her water subjects and portraiture undertakes the tour responsibility of Australian artists concerning the islands of Leros, Kalymnos, Patmos and Leipsoi. Her main purpose is to teach everyone taking part in this tour, named Greek Island Odyssey.

Moreover, Maria Venardi an eminent chef and writer of cookbooks organizes gourmet tours for Australians to Greece. Maria guides the tourists and simultaneously informs them about the traditional Greek cuisine of each place.

Finally, under the initiative of the Greek lawyer Eugenia Mitraka, it will be held every two years an International Law and Health Conference in Greece.