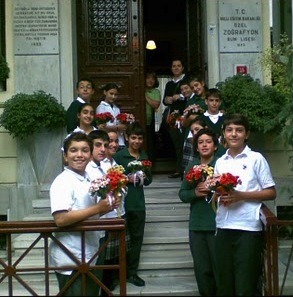 The Vice President of DEREE – American College of Greece, Mr. Nikos Georgiadis, will be the keynote speaker at the glorious celebration of the Zografeion school for its 118th Anniversary. The event will take place in Istanbul at the school’s campus on September 19th, 2011.

Georgiadis, a former member of the Greek Parliament, will meet with the Greek Consul General in Istanbul Mr. Vasilios Bornovas and will attend a Breakfast meeting hosted by DEREE for school counselors from prestigious schools in Istanbul.

Zografeion was founded in the late 19th century, as the growing number of Greek students proved to be more than the Zappeion and Panayia schools could accommodate. The community decided to build a new school, and donations were collected from a number of people. Christakis Zografos, who was living in Paris at the time, made the largest contribution, of 10,000 gold liras. In 1890, the Greek community decided that the school be renamed after Zografos. The school was inaugurated in 1893 and its first alumni were graduated in 1899.

The school, like all minority schools in Turkey, is a secular school. Many famous artists, architects, politicians and theologians of the Greek diaspora have studied at the school, including Patriarch Bartholomew I of Constantinople. Zografeion, like all minority schools in Turkey, applies the full Turkish curriculum in addition to Greek subjects: Greek language, literature and religion.